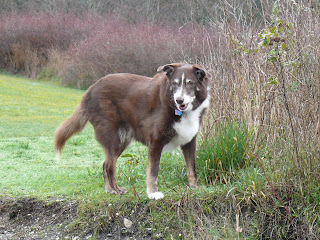 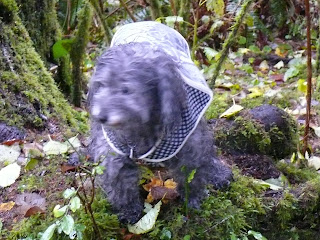 I'm sure you know that there are several tests available now for mixed breed owners to learn the breeds that went into their dogs. The Wisdom Panel test from Mars says they have the most breeds in their DNA databank - 175 currently, I believe. That was the test used by the lecturer at the AVMA Convention who had attendees look at short video clips of mixed breeds and try to identify their breed heritage, then compared it to DNA analysis through the Wisdom Panel.

As I mentioned before, some of the results were pretty surprising, and no one did all that well at getting them right. But I didn't know those dogs, and I assumed that the testing was more accurate than the guessing.

But now I've sent in my Nestle's DNA sample using the Wisdom Panel and recently got back the results. They didn't show any major breed (25% or more of DNA), but they showed two significant breeds (12-1/2% or more of DNA). Unfortunately, those two breeds have made me question the validity of this entire process. The breeds they noted as "significant" were Shetland sheepdog and Boston terrier.

Understand that I'm fully aware that a 4th or 5th generation mixed breed may have a dozen or more breeds intertwined. But this is still a disturbing result. I could maybe fathom a Sheltie somewhere in Nestle's family tree. They are of the herding family at least, though his size, coat, and markings show nothing of a Sheltie heritage. But Boston terrier? Way too small, completely wrong conformation, wrong coloring, to say nothing of temperament.

My guess at Nestle, based on personality, appearance, and size, has always been herding dog (perhaps Kelpie or Border Collie) and sighthound (he looked SO much like a Basenji when I first got him, has outgrown that, but still shows a lot of sighthound characteristics).

So for this analysis to be correct, the remaining 75% of his heritage would have to be a blend of no more than 10% of any one herding and sighthound breed, but be mostly of those two groups to make him what he is. Given that sighthounds are not the most common breeds out there, this seems rather far-fetched.

I still have a Wisdom Panel test yet to do - of Nestle's companion, Diamond - later this month. If those results come back German Shepherd and Irish Setter, I'll know that there's something wrong here!
Posted by Cheryl S. Smith at 12:11 PM